Home » News stories » LESSONS AND OPPORTUNITIES FROM EVERY DISASTER 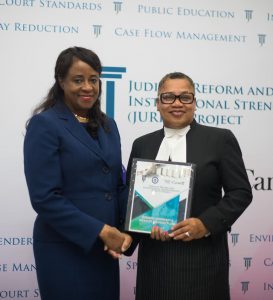 There are valuable lessons to be learned and opportunities to be had from every disaster.

This was the view of the Honourable Mme. Justice Dame Janice Pereira, Chief Justice of the Eastern Caribbean Supreme Court (ECSC). She was speaking at the Canadian funded, Judicial Reform and Institutional Strengthening (JURIST) Project’s official hand over of equipment to support the Eastern Caribbean Supreme Court’s (ECSC) recovery efforts to make the court offices in the Commonwealth of Dominica functional. Following the passage of hurricane Maria in September, 2017 the court offices in Dominica were ruined which led to judicial business in Dominica being inactive. The hand-over ceremony took place at the Dominica High Court on Tuesday February 12, 2019.

The Honourable Chief Justice said: “While we cannot control nature and the unleashing of her wrath from time to time, we can control how we recover from it.” This, she added, was possible by having and implementing a comprehensive disaster recovery plan. She explained that when hurricane Maria ravaged Dominica, it exposed the courts’ vulnerabilities in its ability to recover from such a disaster. However, she pointed out, that it was also a good opportunity for the ECSC to not only simply replace damaged equipment and restore the Dominica courts to its original state but also to modernize the courts to meet with the demands of this technological era to provide better services at less cost to users.

This is all in keeping with the ECSC’s mission to harness available technology to make the courts of the Organisation of Eastern Caribbean States (OECS) more efficient to improve the quality of justice.

She noted that at the ECSC, while they were determined to have the courts in Dominica operational in as little time as possible, one of their aims was not only have the court offices reopened but to seize the opportunity to have the facilities repaired and refurbished in a way that would ensure greater resilience. This included enhancing the courts’ efficiency with the installation of modern court technology.

Dame Janice added that while a sense of normalcy has been returning to the nature isle, there is still plenty work to be done in the recovery process. She took the opportunity to express her gratitude to the Government of Dominica, regional and institutional partners, in particular the Government of Canada, which she said continues to demonstrate its commitment to developing countries of the Caribbean.

Mrs. Gloria Richards-Johnson, Director, JURIST Project who delivered remarks on behalf Her Excellency Marie Legault, High Commissioner of Canada to Barbados and the Eastern Caribbean, said the Government of Canada has been a long-time supporter for justice sector initiatives in the Caribbean.

“We believe that with improved and more efficient court proceedings, the court system is able to better respond to the needs of its citizens. Additionally, it will be better equipped to support the differentiated needs of its citizens, because as we know, men, women children and other different groups are not homogenous and require a court system that can respond appropriately,” she stated.

She reiterated Canada’s commitment to working with Dominica and other Caribbean countries to remove the barriers that prevent traditionally marginalised groups from participating equally in society.

Mr. John. Furlonge, Regional Project Co-ordinator, JURIST Project, gave an overview of the Project and noted that the equipment donated to the Dominica court offices will redound to the benefit of the courts and everyone they serve as it will result in improved efficiency and effectiveness. He added that the provision of equipment to the courts will also assist the Project in achieving one of its overarching objectives which is to reduced delay and backlog.

The JURIST Project also presented the Honourable Chief Justice with a disaster recovery plan which can be adapted and adopted to optimise their capabilities for business continuity in the event of another disaster.

HAND-OVER CEREMONY OF EQUIPMENT TO THE COURT OFFICES...