Home » News stories » Judiciary Must be Committed to Human Dignity 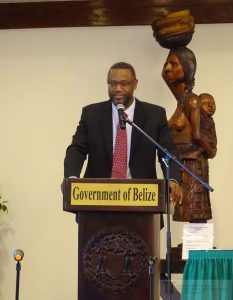 The judiciary, while needing to discharge its role in specific times and context can only be a   judiciary   worthy   of   its   name, if   its   pronouncements are underpinned by core values that are cemented in its commitment to the dignity of the human being and the respect that such dignity commands.

Speaking on day one of the 6th Biennial Caribbean Association of Judicial Officers’ (CAJO) Conference, Mr. Lynn Young, Honorary Consul of Canada in Belize, said that a judicial system is only as strong and independent as the belief and faith of the people in it.

“The judiciary must never forget the value of each human being while also never forgetting that the community has interests that must be protected by reasonable restraints on the activities of individuals,” he reminded.

The Canadian-funded Judicial Reform and Institutional Strengthening (JURIST) Project is supporting the Conference which is being held from October 31 – November 2, 2019 in Belize City, Belize under the theme “Judicial Integrity – The Pathway to Public Trust and Confidence.” Every two years, CAJO brings together judicial officers (including appellate, superior court and district judges) from all CARICOM Member States as well as representatives of the judiciaries of the wider Caribbean for a major judicial education conference. The biennial conferences provide a forum for the sharing and exchanging of ideas, best practices and experiences in relation to a rich variety of tops that are of interest to judicial officers.

The Government of Canada, through its Feminist International Assistance Policy (FIAP), wants to foster judicial systems that respond to the needs of all women, girls, and marginalized groups, while promoting and protecting their human rights. He noted that it was also important to support women’s leadership and representation at all levels of legal and judicial systems. “This people-centred approach recognizes the importance of not only working with institutions like the judiciary, but also supporting the unique needs of the diverse people who need to access those institutions,” Mr. Young explained.

He stated that judicial education and future innovations go hand in hand, but it is also important to recognise that while judicial officers may be at the forefront of policy formulation and implementation in their respective judiciaries, and actively seek novel approaches in the improvement of judicial administration, an overarching principle remains. This overarching principle is the protection of the Rule of Law and the human rights of all people, including the poorest and most vulnerable.

Mrs. Gloria Richards-Johnson, Director, JURIST Project gave an overview of the Project and spoke about its achievements to date and plans for the future.