The Judicial Reform and Institutional Strengthening (JURIST) Project will sponsor the participation of four judicial officers from the Eastern Caribbean Supreme Court (ECSC) and the Caribbean Court of Justice (CCJ) at the Case Management and Vulnerable Witness Conference for Judicial Officers. The Conference is being organised by the British Foreign Commonwealth Office and will be held in Miami, Florida from September 21-22, 2018.

The objective of the Conference is to increase the capacity of judicial officers to employ proper case management practices and to be better able to deal with vulnerable witnesses and complainants especially children. Mrs. Gloria Richards-Johnson, JURIST Project Director will deliver remarks at the Conference.

One of the Project’s immediate outcome is to strengthen the capacity of courts for efficient court governance, case management and case disposition. This Conference is aligned to this outcome. Additionally, one of the objectives of the Sexual Offences Model Court, which is being established in Antigua and Barbuda, is to increase the capacity of justice sector actors to deal sensitively with vulnerable sexual assault complainants, including children.

On day one of the workshop, topics to be covered will include: Case and courtroom management; tackling delay and Criminal Procedure Rules. Day two will look at dealing with vulnerable witnesses, sexual offence courts and the rights of the child and safeguards.

“The value of attending the Conference was not that it presented much that was new concerning the efficient management of cases by judges, which continues to be a major failing and profound problem in our region. Rather, the Conference renewed recognition of the need to promote that efficiency, identified the ways to achieve this, and secured the commitment of participants to take those identified measures.

The lesson learned was that it was sensible to continue one’s personal commitment to working towards improving the performance of colleagues on one’s own judiciary as well as on other judiciaries.

The expectation fostered was that, with the commitment demonstrated clearly by each of the participants, increased buy-in to change by fellow judges was not simply a lofty goal shared by advocates for reform but was one in the process of being achieved.”

“I was invited by the Honourable Mr. Justice Iain Morley, High Court Judge of the Eastern Caribbean Supreme Court (ECSC), to attend a Case Management and Vulnerable Witness Conference which was held in Miami, Florida, from September 20th to 23rd 2018.  The Conference was sponsored by the Foreign and Commonwealth Office of the United Kingdom Government and brought together judicial officers mainly from the British Overseas Territories of the Caribbean and Bermuda. The Conference focused on the use of tools that would enable criminal courts to eradicate delay and reduce the re-victimization of vulnerable witnesses in the trial process.  The JURIST Project kindly provided the financing for my attendance and that of the Honourable Mr Justice Denys Barrow.  We both attended in the capacity of Observers representing the Caribbean Court of Justice. I am grateful to the JURIST Project for their financial support.

The first day of the Conference was spent looking closely at examples of robust and proactive case management with the aim of a more efficient handling of criminal trials. The emphasis on the second day was the use of special measures which would enable children and other vulnerable witnesses to give their evidence to the best of their ability.  Of particular interest on the second day was the presentation by Professor Penny Cooper, UK Barrister, and Co-founder and Chair of The Advocate’s Gateway. Professor Cooper designed and pioneered the role of witness intermediaries and the ground rules hearing approach.

At the end of this worthwhile and very informative Conference, the participants, under the able guidance of the Rt. Honourable Sir Dennis Byron, retired President, Caribbean Court of Justice, drafted and agreed to Conference Resolutions.” 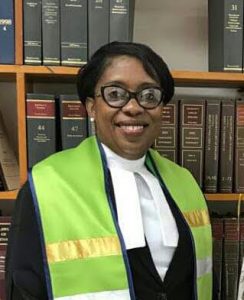 “Throughout my legal career, both as a prosecutor and now a Judge, I have always recognized that giving evidence can be an intimidating process. Therefore, I have always had a keen interest in ensuring that witnesses regardless of their age, background or mental ability were fairly treated and not subjected to unduly harsh and unnecessary questioning. More so as a Judge I have sought to provide an environment where all victims and witnesses are treated with respect and understanding. In this regard I have come to the realization that vulnerable witnesses, particularly children (especially those who were the victim of sexual crimes), the mentally challenged and the elderly found the entire process daunting and somewhat disconcerting. As a Judge I have been called upon to deal with numerous cases of involving vulnerable witnesses. In Grenada, section 67A of the Criminal Procedure Code provides for the evidence of victims of sexual offences to give their evidence in camera. Besides this facility, there are no specific provisions available to deal with these witnesses. It was therefore imperative that the Court in its inherent jurisdiction devise creative ways to manage these matters to ensure that vulnerable witnesses are protected.

The least satisfactory position is having vulnerable witnesses and victims having to relive the same situation on numerous occasions. If the procedure is wrong this may well be the case. The Conference sought to give creative ways which can be given legal footing to remedy this situation. With the legislated implementation of these measures to deal with vulnerable witnesses the criminal justice system, victims, witnesses and society generally will benefit from such a standardize procedure. For example, it will minimize the appeal process, saves cost and more importantly increases the chances of having a fair trial. In this way everyone will benefit including the accused.

There are no rules in Grenada governing the management of criminal cases. To deal efficiently with the criminal case load, a judge is expected to exercise the court’s inherent jurisdiction to deal with these cases justly. I have always tried to prioritize these cases involving vulnerable witnesses, particularly those of sexual offences, since it is my view that the sooner these matters are dealt with, the easier it will be for the victims to move on with their lives, albeit with counselling and the care they require.  As a rule I engage in extensive case management to deal with all criminal cases from the date of arraignment until the matter is finally dispensed with, in an effort to identify all preliminary matters (for example voir dires, issues of identification etc) and efficiently manage the progression of each case.

My expectation is that the Conference will provide  me with an insight into best practices for managing cases and dealing with vulnerable witnesses. The knowledge gained will enable me to make informed decisions in dealing with the issues which are addressed at this Conference. It is my ferverent hope that best practices will be learned and implemented to deal directly with case management and vulnerable witnesses.”

The Eastern Caribbean Supreme Court (ECSC) through its Judicial Education Institute (JEI), in recognition of the importance of proper recording of court proceedings will host

The Judicial Reform and Institutional Strengthening (JURIST) Project in partnership with the Caribbean Association of Judicial Officers (CAJO) will host a virtual workshop titled: “Preparing Decisions

The Judicial Reform and Institutional Strengthening (JURIST) Project in partnership with the Caribbean Association of Judicial Officers (CAJO) will host a virtual workshop titled: “Setting