Addressing gender based violence in the social sphere through campaigns, policies and workshops is only one part of the process, dealing with such cases at court is also very important. And the Belize Judiciary along with UN Women and the Caribbean Association of Judicial Officers want to ensure that when such cases go to court that magistrates and judges fairly and justly arbitrate the matter regardless of gender, religion, sexual orientation, race, or economic status. Today the team launched what’s called Justice through a Gender Lens: Gender Equality Protocol for Judicial Officers. There will be a series of training’s for these judicial officers to promote this protocol. Here is more from the launch.

“A good starting point is a discussion on gender equality. We should turn to the first preamble that appears in our constitution and it affirms the dignity of the human person and the equal and unalienable rights with which all persons of the human family are endowed by their creator.”

“Most relevantly, it states that the state is to ensure gender equality, those words actually appear in our constitution.”

“It is the mandatory duty of the judiciary to explore all possible avenues to ensure that there was access to justice to all persons especially the disadvantaged. It is our duty to make that a reality and not a buzz word. The introduction of the Gender Equality protocol represents a significant step in that ongoing process.”

“It impacts how people are treated when they are interfacing with the court and its various processes so it then requires that judicial officers and all court officials make adjustments to provide for access to justice for all.”

“In order to support the role out of e protocol, it became necessary to train the trainers across the region and as a consequence two of our judicial officers have been trained as trainers.”

“it is the hope that judicial officers will be rendered more gender sensitive when presiding over cases and acquire the expertise to apply the protocol as a matter of course from day to day.” 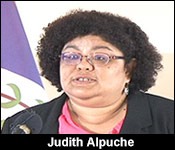 “For us at the Ministry of Human Development, there is quite an alignment between all the topics or the areas that are covered by this protocol and our portfolio responsibility with regards to women and regards to children because there are issues of custody in there that speaks to the best interest of the child so we are very encouraged and heartened by these protocols.”

This initiative is part of the regional Jurist project. In terms of training, this week will be the second round and it will cover the practical components of the protocol. The training session today and tomorrow is for the magistrates and Thursday and Friday’s session will be for the judges.